While pet owners might lose their minds over the high-pitched shrieks and peeps of squeaky toys, dogs love them! How? Why? What could dogs possibly love about the squeaking sound?

Perhaps they want to get to the bottom of where the sound is coming from, or maybe they’re just simply obsessed. One thing is for sure – squeak toys can keep dogs occupied for hours.

Why Do Dogs Love Squeaky Toys?

Dogs love toys in general – but squeaky toys have to be at the top of the list because they come in numerous sizes, shapes, and textures. From plush toys to rubber toys, these can all produce a squeaky noise and get dogs excited. Why do dogs love squeaky toys? In fact, there are a number of reasons – let’s take a look at a few of them:

Dogs Love the Thrill of the Chase

According to many canine experts, squeaker toys have similar sounds to the prey that dogs are hardwired to hunt. Hence, it triggers their hunting instinct.

However, the pups that most dog owners have today don’t really have to hunt for their food, so why is this a trigger? While these dogs have their food provided to them in a bowl daily, that natural animal instinct is in their blood.

This explains why pet parents sometimes find their dog’s squeaky toy in shreds. The squeak often resembles injured prey, which is why the dog won’t stop until it’s “dead.” This is most noticeable in sporting and herding breeds and small dogs such as terriers.

Many dogs have histories that involve hunting smaller animals. This theory can be further proved when observing non-hunting breeds. They’re often not bothered by these types of toys. 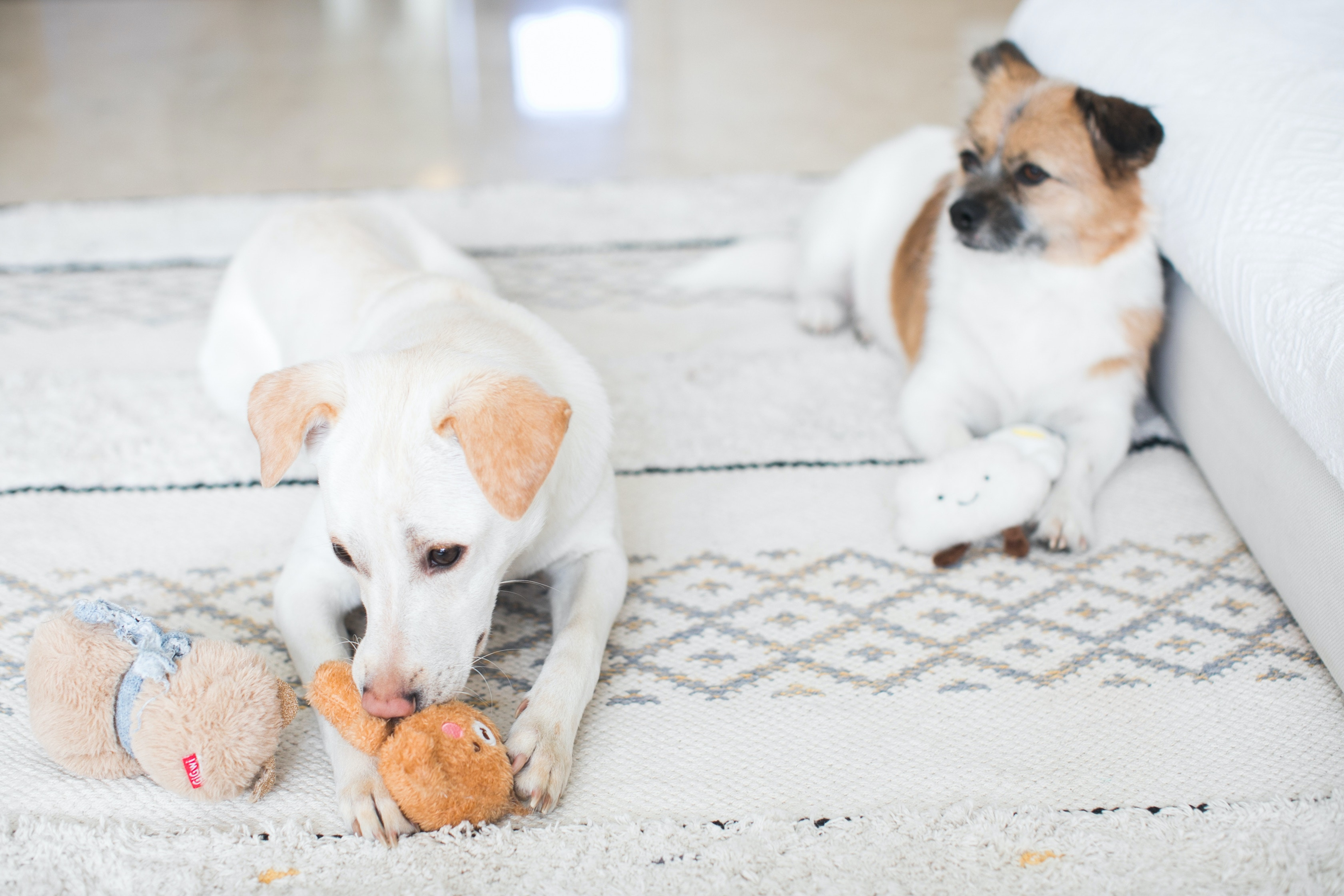 It’s a natural reaction for both animals and humans to keep doing something that they find fun. This applies to dogs and their squeaky toys.

When a dog chomps down on their new squeaky toy, the sound is a symbol of a gratifying reward. The dog feels as if they’re accomplishing something.

Several studies also state that sounds made by a squeaky toy release dopamine in the dog’s brain – a feel-good chemical.

Our furry friends most certainly crave more of these happy feelings. Therefore, they constantly return to the squeaky chew toys, which instills a feedback loop. This makes sense, doesn’t it? 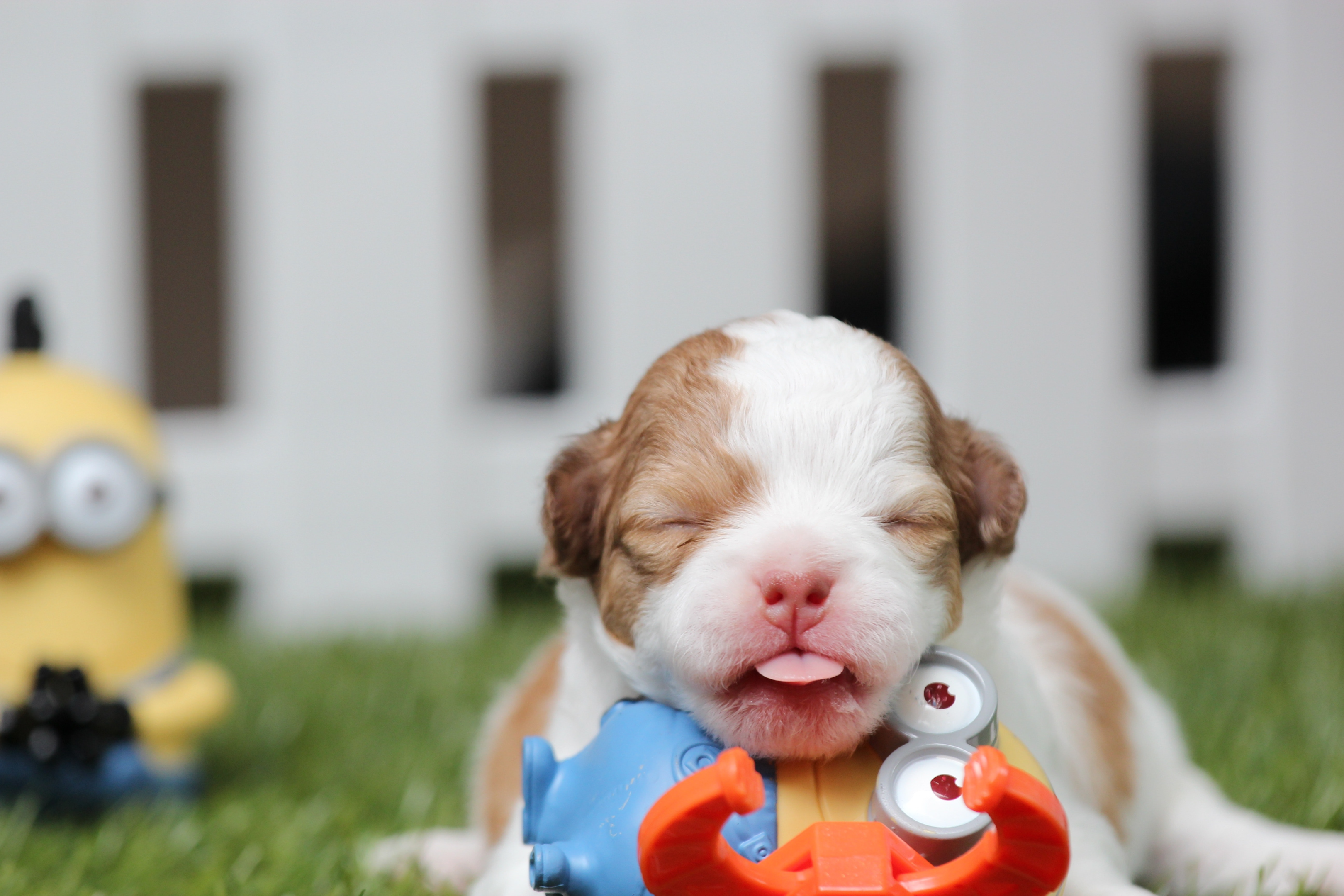 While some dogs are content with a plush chew toy, a squeak toy takes other dogs’ playtime to an entirely different league.

The sounds made by a squeak toy give dogs rapid feedback that their bite is effective and strong. This keeps them stimulated to keep playing as they’re satisfied with their progress. 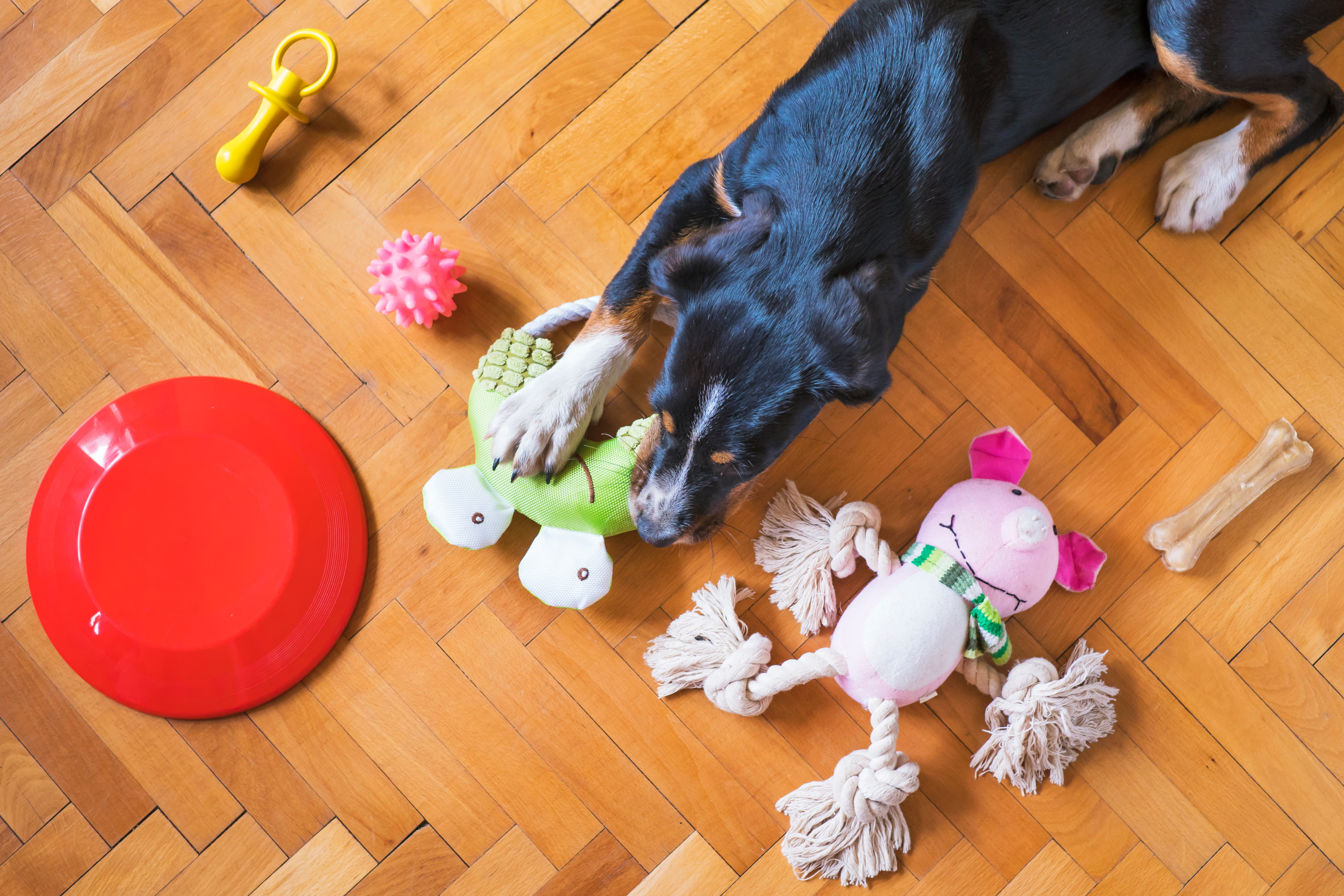 Now, who doesn’t love toy play? It’s just plain fun! Well, yes and no. While most dogs love their toys, this could also be a sign that they want to play with their owner.

A dog owner should be able to pick up on certain things their dog does to communicate with them. From the simple movements of the dog’s tail to them jumping up and down uncontrollably, everything they do means something.

However, other actions might be a little more subtle – for example, if the dog chews on the new toy right next to its owner, this could be a sign that they want to bond with their human. 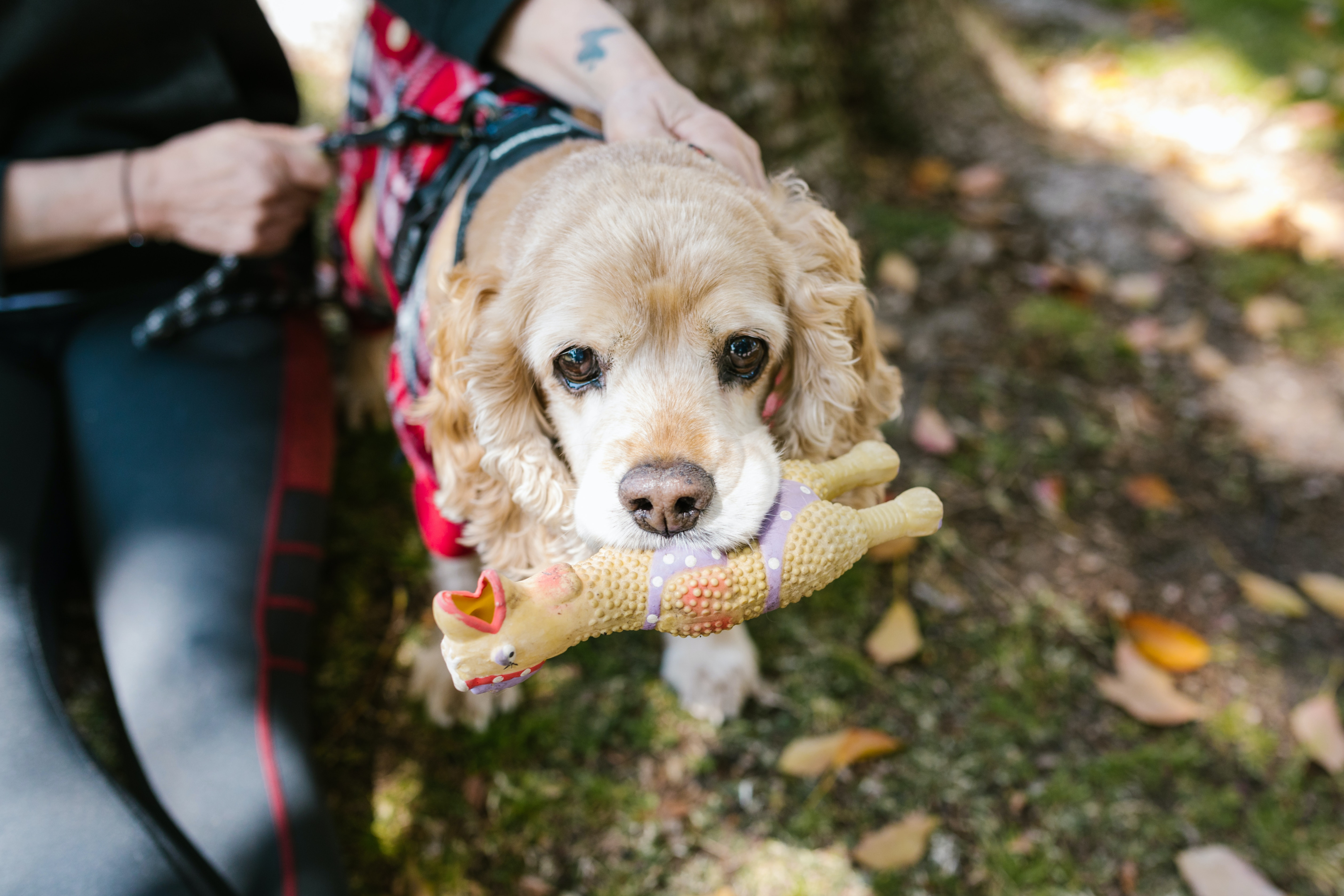 Okay, obviously, the dog is unaware of this one, but the natural urge to chew on certain toys improves the dog’s gum and tooth health. Canines that are active chewers experience less plaque build-up than dogs that don’t.

Who knew these squeaky toys had health benefits? Hence, squeak toys don’t only intrigue a dog for the loud squeaker, but they also help the pup by scraping its teeth and massaging its gums. 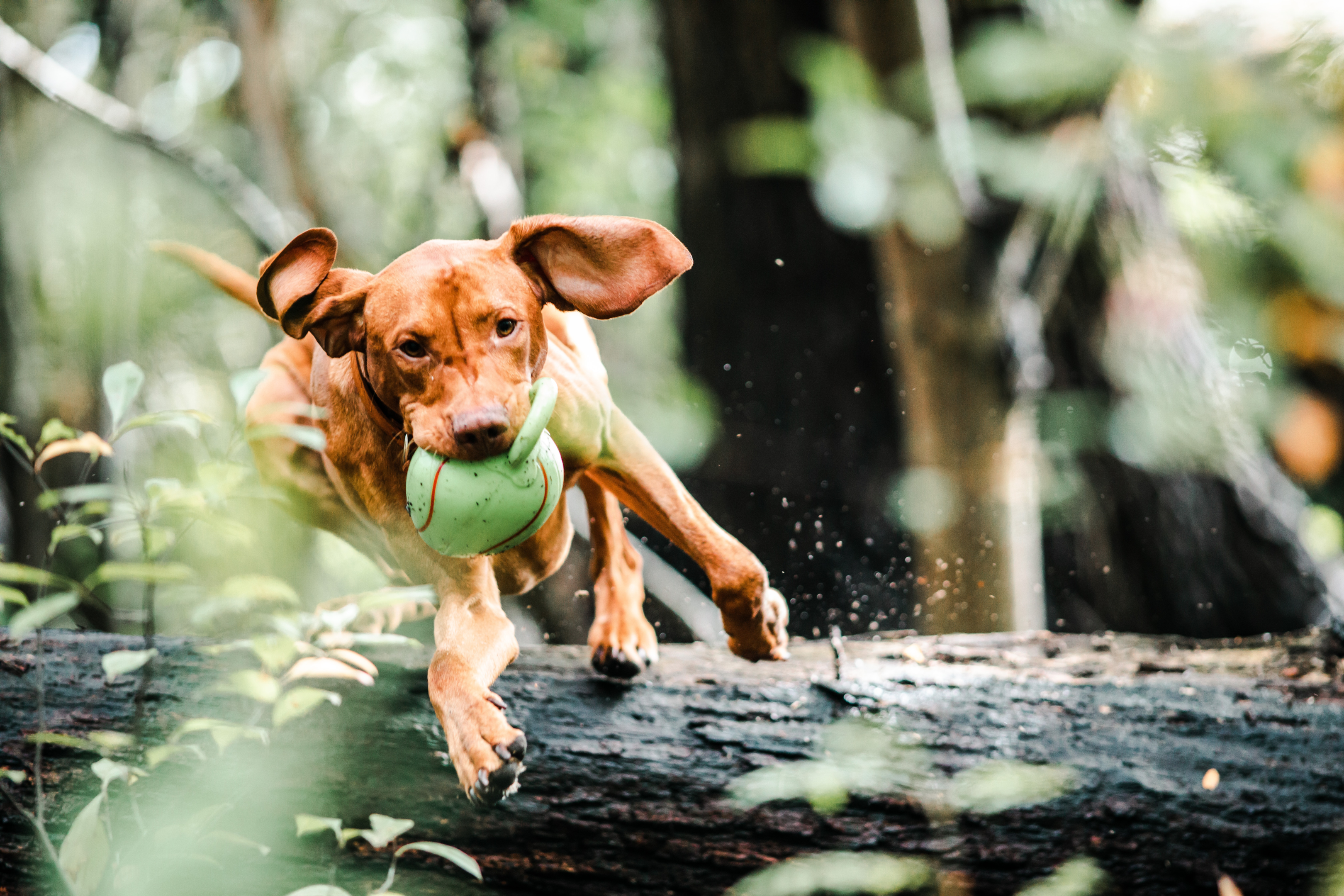 Are There Potential Dangers Associated with a Squeaky Dog Toy?

What could possibly go wrong with some good, old-fashioned, instinctual fun? Nothing, unless the dog eats the squeaker or stuffing after ripping the toy apart. Hence, keeping an eye on the dog while they are playing with toys, particularly squeaky ones, is critical.

Additionally, pet owners need to train their dogs from an early stage on when to drop or leave the toy. This is important in case the dog is playing with damaged toys. Dog parents need to inspect a dog’s toys and be able to get the toy away from the pup without playing tug-of-war in the process.

Can Squeaky Toys Be Used for Training?

The squeaker toy can be a subtle approach to promote a dog’s habits, whether it’s a chew toy or squeaky rope.

A simple approach could be hiding the dog’s favorite toy, calling the pup, and rewarding them by giving them the toy when they come.

The sound of the squeaker can also redirect the dog’s attention away from something they shouldn’t be doing, such as nipping.

Moreover, the most entertaining way to use a squeaky toy is to utilize it to get the dog’s attention while snapping pictures. Squeeze the toy when the dog is in a solid position to get its undivided attention. This is how to get the perfect shot of the cute fluff-ball. 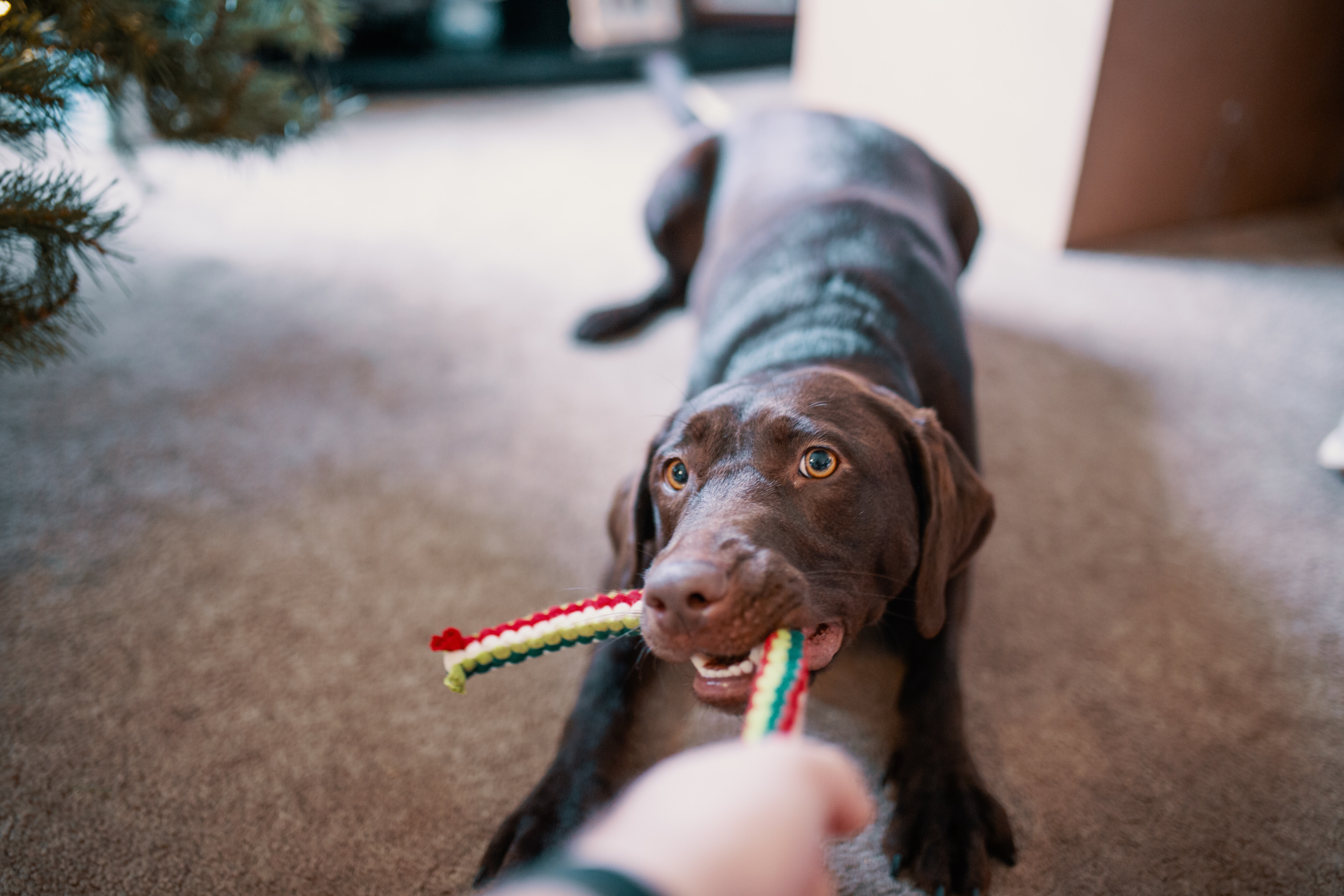 Is it Time to Accept the Squeak?

It’s evident that most dogs like squeaky toys for a number of reasons. Who can resist the squeak? Most pups enjoy playing with these toys as it stimulates prey drive. The high-pitched squeak is immensely satisfying. That being said, older dogs might prefer something simpler such as tennis balls.

Now that we know why a dog loves these toy types so much, it’s time to add more of them to his or her collection!